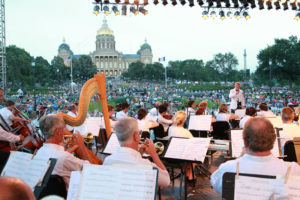 Iowa’s largest single-day concert event is scheduled for tonight on the West Terrace of the Iowa State Capitol.

This is the 25th year for Yankee Doodle Pops which typically gathers 100,000 people on the lawn to hear the Des Moines Symphony.

“He’s obviously one of Iowa’s wonderful ambassadors throughout the world,” Giunta says, “and we just love it when he’s available to sing with us.”

Estes is from Centerville and is credited with raising more than $500,000 for Nothing But Nets — an organization that distributes nets and other malaria treatments to protect families in sub-Saharan Africa. A woman from the United Nations who heads up the charity will be joining Estes and Giunta on-stage.

“She’s coming to introduce him,” Giunta says, “so that’s going to bring some attention to his cause and will certainly be one of the many examples of not only his wonderful artistry but the way he thinks about life and helping people and his philanthropic means.” 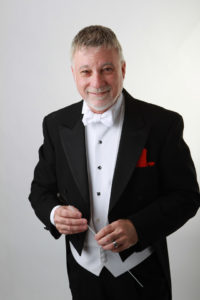 In the two-and-a-half decades of Yankee Doodle Pops, Giunta says they’ve only had to cancel the popular event once due to severe weather. Another year, he recalls, a storm was approaching from afar when the orchestra started.

“I had a guy watching the radar and as the storm got closer, we sort of cut some of the program,” Giunta says. “It was a year that Simon was singing with me again and we cut a lot and we got to Simon and we got to a shortened version of the 1812 Overture, we played the marches and shot off the fireworks and got all of that done before the rain started.”

While he’s conducted musicians all over the world, Giunta says he’s become “pretty immune” to the anxiety and nervousness most of us would experience standing before an audience of 100,000 people. He’s says it’s a thrilling rush of adrenaline.

“From where I stand on the podium, if I do a 360, I see people listening from parking garages and patios of buildings that are nearby and, of course, that vast audience that goes as far as the eye can see,” Giunta says. “It’s very exciting and I think the orchestra always loves playing for that many people.”

This marks the ninth year for the Yankee Doodle Drive Against Hunger: A Symphony of Caring. During the concert, anyone who donates at least two non-perishable food items will receive a discount coupon for next season’s Des Moines Symphony Masterworks Concert.

The winner of the symphony’s annual “Oh Say, Can You Sing?” Competition will open the concert with The Star-Spangled Banner. The event is free and begins at 8:30 PM.