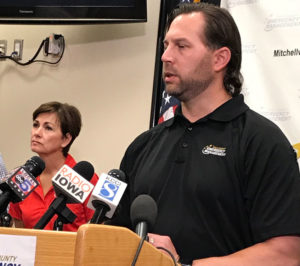 About 240 single-family homes on the east side of Des Moines have been heavily damaged by flooding. Des Moines Mayor Frank Cownie said some of the homes aren’t stable and may have to be condemned.

“About 10 commercial buildings also damaged, there’s been a couple of hotels and six apartment buildings also…all around the Four Mile Creek area,” Cownie said during a mid-day news conference in Des Moines.

Four Mile Creek is just east of the Iowa State Fairgrounds. Assessment teams are canvassing other parts of Polk County to check the extent of what the National Weather Service called “catastrophic” flash flooding that struck over the weekend.

Polk County Emergency Management director A.J. Mumm said the “true, exact number” of homes that were damaged by this weekend’s flooding may never be known.

“With a tornado-type damage…it’s more obvious of what structures are impacted and which ones are more severe than others, this is a very difficult circumstance for damage assessment,” Mumm says. “…You may have a neighbor, taking up their own carpet, disposed of it properly, replaced their own carpet and moved on and those numbers never really get recorded in the system.”

“I continue to be so impressed with the strategic, coordinated collaboration that we see happening at events like this,” Reynolds said. “….Our thoughts and prayers continue to go out to families that have been impacted.”

Earlier today Reynolds issued a state disaster declaration for Polk County as well as Boone, Dallas and Jasper Counties. That has triggered the Iowa Individual Assistance Grant Program. Households at or near the federal poverty level may qualify for grants of up to five-thousand dollars to repair homes and cars, to replace clothes, food or appliances or to pay rent on a new place.