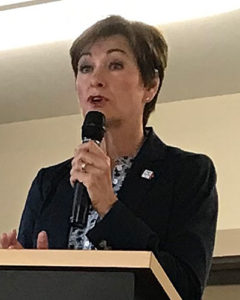 Governor Kim Reynolds is not promising to appoint a woman to the all-male Iowa Supreme Court.

“First of all, it’s about getting the right person,” Reynolds says.

Iowa Supreme Court Justice Bruce Zager is retiring September 3. Reynolds will choose his replacement from a list of three nominees submitted to her by the Iowa Judicial Nominating Commission. Only two women have ever served as justices. There are seven men on the state’s highest court today. Reynolds is seeking her first full, four-year term in office this November. Reynolds says she won’t make being the first female governor the cornerstone of her campaign.

“I want people to select me because they think I’m qualified and I’m the best person. I don’t want to fill a slot,” Reynolds said. “That’s how I feel about that.”

The Judicial Nominating Commission will meet next Monday, July 9, to interview the Iowans who applied for the opening on the state’s supreme court. Fifteen of the 22 applicants are women.