You are here: Home / Fires/Accidents/Disasters / Saylorville Reservoir should be able to handle high flow without more flooding 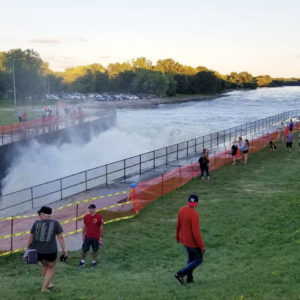 There’s already a lot of damage to homes and businesses in the Des Moines area from flash flooding over the weekend, but it appears the region will be spared from more widespread flooding in the near future.

Jeff Rose is with the Army Corps of Engineers at Saylorville Lake, a reservoir that provides flood control for the city. “The weather forecast and the extended outlook look very favorable for us,” Rose says. “Let’s hope that holds because we don’t need any more moisture in our watershed.” Saylorville Lake is located on the Des Moines River. Rose says water is coming into the lake at 31,400 cubic feet per second. The Corps is letting water out of the lake at a rate of 21,000 cubic feet per second, which is the maximum load.

That’s two feet below the reservoir’s maximum flood pool. The reservoir’s concrete spillway can handle 884 feet of water, so with the lake expect to rise to 888 feet, inflated crest gates will be put in place this week to hold back the additional water.

“We’ll inflate the crest gates, which will give us another six feet on top of the spillway, which brings it to 890. We’ll be starting to hold water on Wednesday,” Rose says. He’s confident the inflated crest gates will work. They were tested just last week.

“Everything operated as normal,” Rose says. The main road over the Saylorville Dam will be closed on Wednesday, which in the Fourth of July, normally one of the busiest days of the year on the 26-thousand acre lake. Most of the lake’s boat ramps are closed and boating is NOT advised.

“Because of the high elevations and the amount of debris that’s in the water…it’s just not safe boating,” Rose says. Saylorville Lake first opened in 1977.