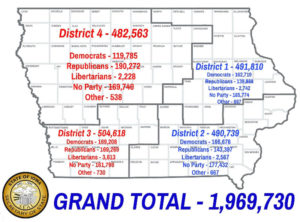 The increase was likely fueled by the Iowa Democratic Party’s statewide primary for governor and Democratic primaries in three of the four Iowa congressional districts.

The last time Democrats saw a voter registration increase of this magnitude in the month of June was back in 2006. Democrat Chet Culver won the party’s competitive gubernatorial primary that year, en route to winning the governorship that November.

Republicans had just one statewide primary in June. for secretary of agriculture. Republicans gained about registered voters last month.

By the end of June, nearly two million Iowans were registered voters according to a report from the Iowa Secretary of State’s office. The majority of Iowa voters — nearly 695,000 of them — are independents and are registered as “no party” voters. Republicans have a roughly 24,000 registration edge over Democrats statewide.

The two Iowa congressional districts that basically cover the eastern half of the state have a voter registration edge for Democrats, while the fourth district that covers northwest and north central Iowa has a significant Republican voter registration edge. The third district that covers the southwest quadrant of the state is basically a draw, with nearly an equal number of Republicans and Democrats.

Republican Rod Blum of Dubuque is seeking reelection in the first congressional district. That’s where Democrats hold a roughly 23,000 voter registration edge over Republicans. Abby Finkenauer of Dubuque is Blum’s Democratic challenger. While incumbents are heavily favored to win congressional race, this contest is often listed as a toss-up by national rating agencies.

The Cook Political Report uses the phrase “leaning Republican” in its rating of the third district race between Republican Congressman David Young of Van Meter and Democrat Cindy Axne of West Des Moines.

Republican Congressman Steve King’s district has about 70,000 more Republicans than Democrats. J.D. Scholten of Sioux City is the Democrat who’s challenging King’s bid for a ninth term in the U.S. House. Democrat Dave Loebsack of Iowa City is seeking a seventh term in congress. He faces a rematch with Republican Christopher Peters of Coralville in the second congressional district. It leans Democratic, with about 23,000 more Democrats than Republicans.

Independent voters are the largest block of voters in Iowa’s first, second and third congressional districts. In the fourth district, Republicans even outnumber independents — by about 20,000.

There were about 11,000 registered Libertarian voters in Iowa at the end of June.