You are here: Home / News / The efficiency of a parade for vote-seeking politicans 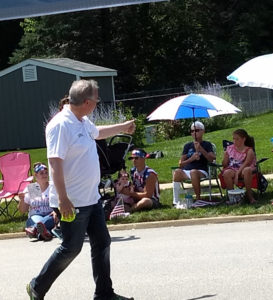 Parades are a popular venue for politicians and the 4th of July holiday provides opportunities for many of the names Iowans will see on November’s ballot.

Candidates know they’ll be seen by about 50,000 people when they walk through the 4th of July parade in Clear Lake. Gubernatorial candidates Kim Reynolds and Fred Hubbell were there.

“Campaigns are all about trying to get in front of as many people as possible all across the state and you’re going to have tens of thousands of people here today,” Hubbell said.

Reynolds told reporters: “It’s about community It’s about bringing people together and it’s about celebrating the birthday of America.”

Fourth District congressional candidates Steve King and J.D. Scholten were there, too.

“There’s not going to be an unhappy person all the way up and down all of the parade route here today,” King told reporters.

Scholten said in a separate interview: “For me, it’s the fun part of campaigning, getting to see all the families together.”

So, what are most of those lined up along the parade route there to see? “The floats” was a common answer from the crowd in Clear Lake. One woman said her favorite part was watching kids in costumes and “all the sparkle.” She was less enthused about the candidates.

“We don’t come to watch them. I don’t really think they should be in our 4th of July parade,” she told one reporter. “They should have their own thing.”

But it’s likely everyone who saw candidates walk through the parade will see them once again — perhaps in a campaign ad — as it is just 18 weeks until Election Day.