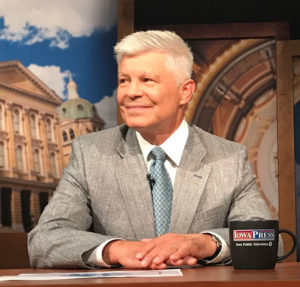 The head of the Iowa Flood Center says “for the time being” the flood threat has subsided in Iowa.

“Some rivers, mostly in the north, are at elevated stage levels, some exceeding flood levels. And, of course, water flows downstream, so we expect tat some stations downstream will also experience hopefully minor flooding,” says hydrologist Witold Krajewski, director of the Iowa Flood Center at the University of Iowa.

Krajewski says the peak flood season in Iowa is typically in May, June and early July — and the data shows flooding is becoming a “common” occurrence.

“We are experiencing this. The temperatures and the humidity are slowly increasing and those are favorable conditions for precipitation,” Krajewski says.

He recommends that city and county officials pour over the flood prediction maps his center has developed for Iowa and make plans for responding to flood levels that haven’t yet been seen in Iowa. Krajewski made his comments during taping of the “Iowa Press” program that airs tonight on Iowa Public Television.