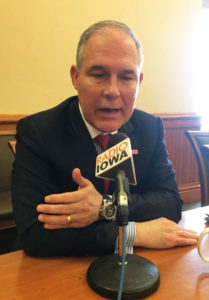 None of Iowa’s elected officials have used the phrase “good riddance,” but they are welcoming EPA Administrator Scott Pruitt’s resignation.

Senator Joni Ernst, a Republican, had called Pruitt “swampy.” Ernst was among those who accused Pruitt, who is from Oklahoma, of trying to undermine the federal ethanol production mandate.

Republican Senator Chuck Grassley said Pruitt had lost the public’s trust through his “ethical scandals” and undermining of the president’s promises on renewable fuels.

The new EPA Administrator is a former coal industry lobbyist and Republican Governor Kim Reynolds said she’s hoping he will “honor the president’s commitment to the Renewable Fuels Standard.”

The head of the National Corn Growers Association said it’s no secret farmers have been frustrated with Pruitt, who’d been granting waivers so big oil refineries didn’t have to blend as much ethanol into gasoline. The head of a biofuels industry group said Pruitt had driven “a wedge” between President Trump and his supporters in the Midwest.