You are here: Home / Human Interest / Iowan who died in Pearl Harbor to be buried in Osage tomorrow 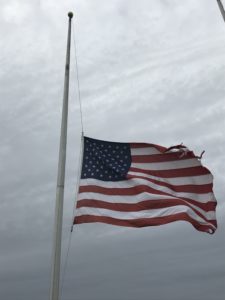 An Iowan who died 76-and-a-half years ago is being honored tomorrow.

Leon Arickx of Mitchell County, Iowa, was a Seaman First Class in the Navy. He’d been assigned to the battleship USS Oklahoma, which was moored in Pearl Harbor on December 7, 1941. The ship was attacked by Japanese aircraft and hit by several torpedoes. It quickly capsized according to Navy records. Arickx and 428 other crewmen on board died. Arickx was 22 years old.

Arickx and other unidentified sailors were buried in the National Memorial Cemetery of the Pacific in Honolulu. In 2015, the Department of Defense ordered the remains of soldiers who’d served on the USS Oklahoma be disinterred. Arickx’s remains were identified early this year and returned to his family in Iowa for burial.

A graveside service for Arickx will be held at Sacred Heart Cemetery in Osage tomorrow at 11 a.m. The governor has ordered flags to be flown at half-staff tomorrow to honor Arickx. His name is still engraved on the “Walls of the Missing” at the National Memorial Cemetery in Honolulu, but a rosette has been placed next to his name, indicating his remains have been returned to his relatives.

The governor has ordered flags on state buildings to be flown a half-staff from sunrise to sunset on Saturday to honor him.