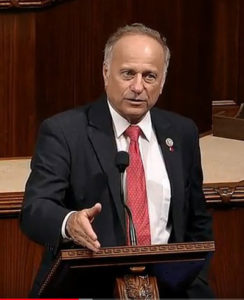 Iowa Congressman Steve King says he’s getting signals from the White House on the president’s preferred path on immigration policy.

“I talked to the White House about three or four days ago. They said: ‘We’re done with amnesty,’ but they’re interested in going forward with rifle-shots of immigration reform, which is what I’ve always been for,” King says. “Let’s set ’em up one bill at a time. Let’s not crowd them all together and confuse the American people. Let everybody see what we’re doing.”

King suggests with a “rifle-shot” approach, there would be bills that address just one topic, like border wall funding in one bill and another that addresses so-called “DACA” recipients who were illegally brought into the country by their parents when they were children.

“If we can’t move anything because all of the oxygen is sucked out of the political atmosphere by the upcoming announcement of an appointment to the impending vacancy on the US Supreme Court, I guess that’s alright because that’s the most important thing right now,” King says, “to get a constitutionalist seated on the court who will rule on the text and the original understanding of the Constitution and the text of the law rather than legislate from the bench.”

President Trump is scheduled to reveal his nominee for the Supreme Court vacancy on Monday night.

Last month, Congressman King was among the Republicans who helped defeat two immigration bills advanced by House GOP leaders. King says the failure of those bills improves the chances future proposals will be in line with his views.

“I think they are better than I expected they would be at this point,” King says. “My major concern on immigration, the thing that has animated me on the immigration issue — and I don’t think anyone out there would question whether I am animated on that issue or not — it has aways been for restoring respect for the rule of law.”

“We absolutely have to have secure borders, but then beyond that we’ve got to have an immigration court that is functional and not months and even years behind,” Scholten says. “And then we need to have a visa program that matches our economy and then a pathway to residency and a pathway to citizenship that should be earned.”

Scholten says it’s frustrating to watch the D.C. debate on this topic.

“I mean what isn’t happening is something being done,” Scholten says.

President Trump tweeted Thursday that Congress should “FIX OUR INSANE IMMIGRATION LAWS NOW.” This followed recent presidential tweets suggesting Republicans pass the House GOP’s immigration-related bills along with the idea Republicans should abandon the issue now and wait for a “red wave” of Republicans to be elected to congress.