You are here: Home / Fires/Accidents/Disasters / Clean up following oil car derailment near Doon could continue for months 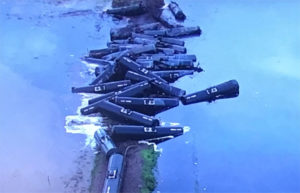 Clean-up continues in northwest Iowa near Doon where 32 BNSF railcars carrying oil derailed June 22. Fourteen of the 32 cars leaked approximately 230,000 gallons of crude oil into flooded farm fields, some it making into the Little Rock River.

The trains began running again in three days — but the DNR’s Environment Program Supervisor, Ken Hessenius, says there’s lots of clean up left to be done. “There’ll certainly be a period of weeks and months of cleanup of that oil and residue that has escaped into the river floodplain. There’ll be a lot of negative removal and there’ll be some soil removal undoubtedly,” Hessenius says.

Hessenius says the conditions around the accident site are making it tough to get right in. “Of course flooding has added to some of the headache here in that areas are not accessible to equipment to get in there to do some of the necessary cleanup,” he explains.

Flooding is believe to have caused the cars to derail. Hessenius says he’s never had to deal with a spill of oil this large in his 30-year history in northwest Iowa. “There was a release — actually a derailment of ethanol cars — near Graetnger about a year-and-a-half ago that we worked with,” Hessenius “The only other thing that I can think of in my years here was the explosion at the Terra nitrogen blast down near Sergeant Bluff. And I believe that was 1994, and that was a release of anhydrous ammonia and other chemicals.”

At this point, the number of gallons spilled is still an estimate. Hessenius thinks it’s a fairly accurate assessment of the total and the railroad will eventually come up with final numbers. Hessenius says he thinks the response went very well with good cooperation between the railroad, the city of Doon, and its residents.