You are here: Home / Crime / Courts / Grassley says confirmation process for Kavanaugh will be expeditious 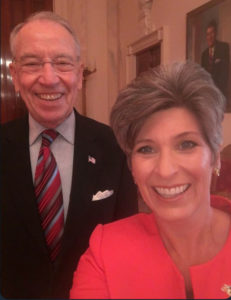 Republican Senator Chuck Grassley says he has a “favorable” impression of President Trump’s nominee for the opening on the U.S. Supreme Court.

“I’ve been following him on the D.C. Circuit Court and he’s been pretty much a person that believes in the Constitution as basic law and something to protect the people from their government,” Grassley said this evening during an interview with Radio Iowa.

Grassley was at the White House tonight as Trump revealed Brett Kavanaugh was his pick for the opening on the nation’s highest court. Trump said he wants “swift confirmation” in the Senate for Kavanaugh. Grassley, as chairman of the Senate Judiciary Committee, will lead the confirmation hearings for Kavanaugh.

“We’ll just be very expeditious, but we’re going to do it with certainty to do our constitutional job, so we can’t rush it just for the sake of rushing,” Grassley told Radio Iowa. “We’re going to give due consideration, as you would expect us to do.”

Kavanaugh has been a federal appeals court judge for the past 12 years and has written more than 300 opinions. Grassley says his committee will hire additional staff to conduct a thorough review of Kavanaugh’s judicial record. During a speech on the senate floor earlier today, Grassley criticized Democrats in the Senate who’ve been saying they could not support any of the 25 candidates Trump was considering for the court.

Senator Joni Ernst, who was also present at the White House for tonight’s announcement, issued a written statement. Ernst said Kavanaugh is “highly-qualified, well-respected” and someone who deserves “timely confirmation” to the Supreme Court.

Groups in the “Why Courts Matter Iowa” coalition issued a far different assessment, calling Kavanaugh “as far from mainstream as you can get” and “handpicked” to overturn the 1973 court ruling that legalized abortion.