You are here: Home / Fires/Accidents/Disasters / Tornado numbers are down despite storms that have brought lots of rain 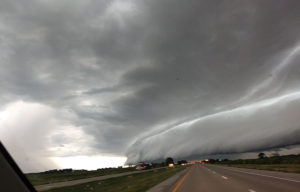 While tornadoes can strike during any month of the year, Iowa is now out of the “peak” season for tornadoes and the numbers are well below the norm, according to meteorologist Craig Cogil at the National Weather Service.

“So far this year across Iowa, we’ve seen 15 tornadoes,” Cogil says. “Typically by this point in the year, we’re much closer to 30 or 35 tornadoes, so, half of what we normally see.” Even with the 15 twisters, none of them were very powerful and there were no reports of any injuries or significant property damage.

“Out of the 15 tornadoes, 13 of them were EF-0s and there have only been two EF-1s,” Cogil says, “and most of them have been in just corn fields or soybean fields, causing very little damage.” While some storms this spring and summer have dropped significant rain that caused severe flooding in parts of the state, Iowa has managed to miss most of the -very- bad weather.

“A lot of the systems that are really problematic for us just haven’t been occurring across the state,” Cogil says. “They’ve either gone south of us, some of them have been north of us. We just haven’t seen the set-up that really produces those big, dangerous days where we get a lot of the strong tornadoes.” While Iowa’s only had 15 tornadoes this year, the state had 55 twisters in all of last year, including a dozen that were classified as EF-2s.