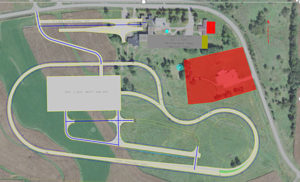 Map showing the location of the proposed TIM.

The Iowa Department of Transportation Highway Division is seeking federal funding to open a special facility in Jasper County that would train its employees and others who respond to traffic accidents and problems.

The plan would use 70 acres of land provided by Jasper County near the Iowa Speedway to create the $11.8 million Traffic Incident Management Center (TIM). The director of the DOT Highway Division, Mitch Dillavou, says the center will help them learn the best way to respond and clear accidents and other problems on the state highways.

“We want to start clearing these incidents as fast as you can, because the longer people sit in traffic, the longer something can happen. Every minute that goes by there’s another 2.8%  chance of another incident happening. And we want to improve the way that we clear up incidents,” Dillavou says.

The head of the Motor Vehicle Enforcement, David Lorenzen, says a test track of sorts would be build on the site that features real-life roadways. “Two lane, four-lane, intersections, gravel roads. We’ll put roundabouts, cul-de-sacs, anything that would create what we have in Iowa today,” Lorenzen explains.

Lorenzen says the need to be on top of issues has increased as the traffic volume has increased. “Our vehicle miles traveled are at an all-time high –33 billion vehicle miles traveled in Iowa — and that continues to increase. Trucking is increasing it. The system is really strained, so we’ve got to do the best we can on the system to keep it clear,” according to Lorenzen.

He says the site would allow them to do the training in realistic conditions. “All this training can be conducted at the speeds that we run on our roads today — that is why it is such a large facility,” Lorenzen says. “It would also law enforcement and emergency vehicles to train in emergency operations modes.” Lorenzen says they used to do some training at the Iowa Speedway, but the track gets income from testing by race teams that are now using it and that makes it cost prohibitive.

The DOT is seeking federal money to help fund the cost of construction, which includes laying out the highway sections. “There would be one building which would be a multiple use classroom, very generic building that could be split off into various uses,” Lorenzen says. “We’ve also recently had conversations with the Jasper County Conservation Board, they are directly next to the Sheriff’s office and they are building a learning center out there and they want to talk with us about if there was a way for some coop opportunities so they would not have to build a classroom.”

Lorenzen says police and sheriff’s departments are interested, as is the Iowa Law Enforcement Academy to use the facility for training. He says Tennessee had the only center of this type and then one was recently built in Colorado.

“So this would be the third one that we are aware of in the nation and we feel that it would have a pretty heavy draw from folks at least from the law enforcement end as a regional type draw because there’s just not a lot there. I know that fire folks are very interested in it too and some of those aspects,” Lorenzen says. Dillavou says they are seeking the full cost of the center in what’s called a BUILD grant.

They are hoping the $840,000r cost of the land will be considered as part of the state’s input for the project. Dillavou says the other states have used fees to help fund the ongoing costs of their centers, but that is something they would look into if the funding comes through and the center moves forward.