You are here: Home / Health / Medicine / Sioux City hospital one of the first to use miniature pacemaker 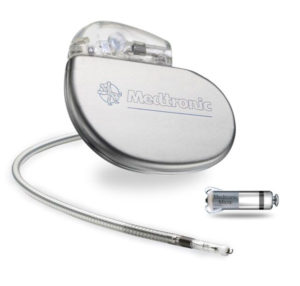 The bullet pacemaker is shown at the bottom right.

Mercy Medical Center of Sioux City has become one of the first Iowa hospitals to treat a patient with the world’s smallest pacemaker.

Doctor Roque Arteaga of CardioVascular Associates implanted the bullet-sized device into the 79-year-old male patient. He says this type of pacemaker does not have a wire lead to attach to the patient’s chest, so the surgery is less intrusive and is done through a catheter.

“The whole device is through the vein, implanted into the heart muscle and provides all the pacing therapies that the patient requires,” according to Arteaga. The Medtronic Micra TPS device is comparable in size to a large vitamin. Doctor Arteaga says the actual implant procedure takes less than an hour and the pacemaker, despite its size, is self-powered

“It has a miniaturized batter, and depending on how much the patient uses the device, can last anywhere from nine to 13 years,” Arteaga says.The patient can usually go home from the hospital the same day after four to six hours of recovery time. The pacemaker is used to treat Bradycardia, a condition characterized by a slow or irregular heart rhythm that causes dizziness, fatigue and fainting spells.