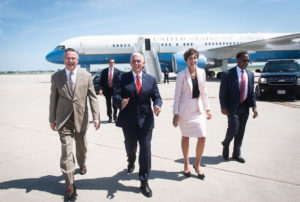 “When it comes to agriculture, I just want to assure all of my friends here in Iowa and all across the region that under President Trump’s leadership, we’re always going to stand with American farmers,” Pence said.

Pence sought to tamp down worries about an extended trade war with China and other key partners like Canada and Mexico.

“I’m pleased to report to you we are making significant progress on reforming the North American Free Trade Agreement and we’re going to make it into a deal that works for American farmers and American manufacturers in the long term,” Pence said, to applause.

The vice president told the crowd he had talked with Trump as he flew from Kansas City to Cedar Rapids yesterday afternoon. Pence then mentioned President Trump’s tweets on the topic of trade.

“He said: ‘Soybeans fell 50 percent from 2012. Farmers have done poorly for 15 years. Other countries’ trade barriers and tariffs have been destroying our business,’ but then he made a promise: ‘We will open things up better than ever better. We’re going to have a level playing field,’ hesaid. And our farmers will start winning again all across the world and I promise you, it’s going to happen.”

Democrats criticized Blum and Republican Governor Kim Reynolds, who met Pence at the Cedar Rapids airport, for failing to press Pence to end the trade disputes now. Abby Finkenauer, the Democrat who’s challenging Blum, said the trade war “is devastating to Iowa families” and Blum should have hosted a meeting so Iowa farmers could take voice their concerns to Pence.

Governor Reynolds issued a news release last night, saying she brought tariffs when she spoke to Pence and told him: “these tariffs will have real consequences in Iowa.” Reynolds also announced last night that she’ll have a roundtable discussion early this  morning with farmers in Ayrshire to discuss the impact of tariffs on China. Fred Hubbell, her Democratic challenger, visited farms in Correctionville, Newton, Deep River and Riverside this week. Hubbell said “a huge chunk” of Iowa’s economy will be damaged by the trade war.