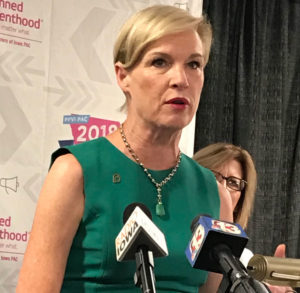 Richards also spoke earlier in the day at the Planned Parenthood office in Des Moines, emphasizing the need for state-level action. “We are the largest provider of women’s reproductive health care in the country,” Richards said. “We’ve been doing it for 100 years and our job has only been made harder by politicians who are putting politics ahead of women’s health and well-being.”

Richards left Planned Parenthood in January after serving as its national leader since 2006. She wrote a book that was released this spring and has not ruled out the idea she might run for office. Richards sounded like a presidential candidate testing the waters in Iowa. Like many before her, Richards cited her connections to the state.

“My dad comes from Shenandoah, Iowa…and his whole family and so I feel like I have, like, a little bit of a connection here,” she said.

Richards is the daughter of the late Ann Richards, who served as governor of Texas.