You are here: Home / News / Governor Ray eulogized as a beacon of light, a man to emulate 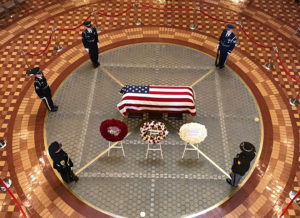 Governor Ray’s casket in the rotunda of the Iowa State Capitol.

Today’s funeral for former Governor Robert D. Ray began with a message from Ray’s pastor that the service was celebrating “a life well lived.” It ended with the congregation applauding the organist’s rendition of Ray’s campaign theme song: “Step to the Rear and Let a Winner Lead the Way.”

Ray died Sunday at the age of 89. First Christian Church in Des Moines was filled this afternoon, with an overflow crowd outside the sanctuary. Elected officials and all four governors who succeeded Ray were among those inside. Scott Raecker, a family friend who is director of the Ray Center at Drake University, delivered one of three eulogies.

Ken Quinn, a former aide to Governor Ray, spoke of Ray’s work in welcoming refugees from Southeast Asia to Iowa. Quinn accompanied Ray to a refugee camp on Thailand’s border.

“They said to us: ‘We want to show you our symbol of hope,'” Quinn said. “…On the wall, we saw the Iowa Department of Transportation highway map. Governor Bob Ray had made the shape of our state a symbol of hope to people 12,000 miles away.”

David Oman, a former aide to Governor Ray, said the lessons of Ray’s life had been learned and re-learned this week.

“None better than the simple reminder that a keen mind, a warm heart and a bias for action by one person can cause great change and uncork good will among so many,” Oman said.

Reverend Bill Spangler-Dunn challenged the congregation to do more than just remember Ray, but be inspired to action.

“I believe that he hoped that someone — perhaps many someone’s — would leave this memorial service and carry that light out and change the world for the better,” Spangler-Dunn said. “…The world is always full of dark corners that need someone to shine a little light into them.”

Ray had asked his pastor and friends to keep it short and they did. From the beginning scripture to the closing song, the funeral lasted just about an hour. The Ray family held a private burial ceremony this morning.