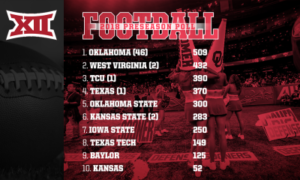 Oklahoma was chosen to finish at the top of the standings for the third consecutive year in the Big 12 football preseason poll, voted on by media representatives.

This year marks the sixth since 2011 in which the Sooners led the preseason rankings. They have captured a Big 12-record 11 league titles, including the last three.

OU garnered 46 of the 52 first-place votes. West Virginia was chosen second with TCU, Texas and Oklahoma State rounding out the top five. The Mountaineers received two first-place nods while TCU and UT had one each. Kansas State was predicted to finish sixth, claiming two first-place votes followed by Iowa State, Texas Tech, Baylor and Kansas.

The top two finishers in the league standings will compete in the Big 12 Football Championship Game on Saturday, December 1 to determine the Conference title.