You are here: Home / Outdoors / Pheasant harvest drops slightly in 2017 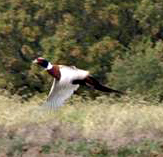 Iowa DNR wildlife biologist, Todd Bogenschutz says the drop follows lower counts in the roadside surveys. “I kind of expected that because the roadside counts…were down 30%. We were in a drought when we did the counts last year, so we think things were probably a little better than that based on what hunters told us,” Bogenschutz says. “The roadside counts said the populations were down about 30% — the hunters said they were only down about 10%.” He says the drought meant there was less dew when the roadside counts were done and that led to less birds out in the morning — which impacted the overall count.

Bogenschutz says the numbers have held pretty steady in recent years. “We’ve bounced up from the all-time lows when we were down to almost a hundred thousand. So we’ve been back up around the quarter-million mark these last couple of years, so we kind of hung right there. Last year we shot about 245,000, this year it was 221,000, so about 20,000 different, right in that same ballpark,” Bogenschutz says.

The next pheasant number survey takes place in August and Bogenschutz says all the weather issues this year didn’t help pheasants nesting numbers. He says they numbers will be status quo at best and likely down. “Given the flooding is on par almost with 1993 levels. A lot of rain in May and June is not good at the peak of nesting. In April we had record snow in parts of the state and some of the birds can nest that early.”

There were 55,000 hunters out this past season, which is down around 4%. He says the survey numbers likely impact the hunting plans of some. “I think hunters do look at the report, I think that’s why hunter numbers are down,” according to Bogenschutz. “They look at our forecast and if we said things are down there’s a few folks who tend not to go. I think when we say things are good or just word of mouth from other hunters, then we go up.”

While Bogenschutz expects the weather to impact the number of pheasants this season — he says southern Iowa had been much drier and that could make for better nesting and numbers there.