You are here: Home / Agriculture / The man who started Sukup Manufacturing has died 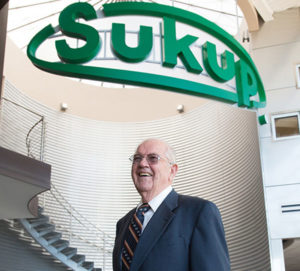 The founder of Sukup Manufacturing in Sheffield died Thursday at a Mason City hospital at the age of 89.

According to the company’s history, Eugene Sukup developed the company in 1962 after looking for a way to improve the grain drying process inside grain bins. He developed and patented the Stirway stirring machine at a local welding shop in Sheffield and began selling the product. Since then, Sukup’s innovative thinking led to him being awarded over 80 patents and numerous awards for the company’s innovations.

Sukup served as company president for 32 years before turning the position over to his son, Charles, in 1995. Sukup’s family members now run the business , which employs more than 600 people.