You are here: Home / News / ‘Champion of Service’ awards to Iowans from Cedar Falls, Lamoni 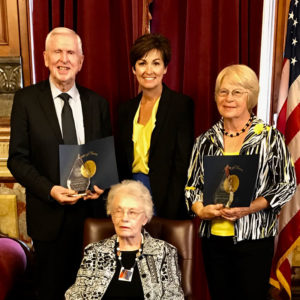 The woman who was the state’s first volunteer coordinator has a message for Iowans. Governor Robert Ray established the Iowa Office on Volunteerism in 1978 and Bobbie Finch became its director.

“Everybody’s got something to give and I feel like it’s a sin if you don’t share it and I guess that’s the best thing I can tell you. Go out and spread the word and do everything you can,” Finch said early this afternoon.

The state agency Finch helped start is now called “Volunteer Iowa.” Finch was on hand today as two Iowans were recognized with this year’s “Champion of Service” awards from Volunteer Iowa. Shirley Kessell of Lamoni helped start a volunteer center in her community as well as a program that encourages people over the age of 55 to volunteer.

“I just want to say thank you to all of the people around me that make volunteerism possible because it isn’t a one person thing, as a volunteer. It includes the whole network of all the people, your family, your co-workers and your community.”

Floyd Winter of Cedar Falls has served on many local and state boards and commissions, including 19 years on the Governor’s Advisory Council to Prevent Child Abuse.

“Really, we are reaching Iowans in a volunteer capacity in many different ways, ” Winter said. “What a great experience. The old saying is: ‘Government is here to help you.’ In those cases, government really was here to help the citizens of Iowa.”

Winter is currently chairman of the Iowa Department of Human Rights Board. Governor Kim Reynolds hosted the “Champions of Service” award ceremony in her statehouse office.