You are here: Home / Military / Sioux City items will travel with namesake ship 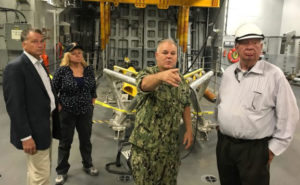 A group of dignitaries from Sioux City were on hand for a mast stuffing ceremony aboard the USS Sioux City in Marinette, Wisconsin this past weekend.

Sponsor, Mary Winnefeld says items symbolizing the city and the navy were placed into the ship’s mast. Winnefeld says she put a gold dove into the mast along with other mementos. “So I’m hoping that the Sioux City no matter where she goes — while she is a warship — she will also bring peace throughout the world,” Winnefeld says.

Winnefeld says those mementos are now a permanent and special part of the USS Sioux City She says there are a lot of neat items that will be with the ship throughout its history — including a coin from Bud Day. Day is the Sioux City war hero who was awarded the Medal of Honor.

Winnefeld and her husband, retired Admiral James Winnefeld toured the ship with the Sioux City delegation. She says excitement is building following the ceremony Friday as the ship nears completion and prepares to sail to Annapolis, Maryland for it’s commissioning.

“It was absolutely fabulous day being there and seeing the ship out. She’s been out on a couple of trial runs,” Winnefeld says. The navy has not yet taken ownership of the ship from Lockheed Martin and the shipyard yet, so an official commissioning date is still pending.