You are here: Home / News / State awards grants to several cultural projects across the state 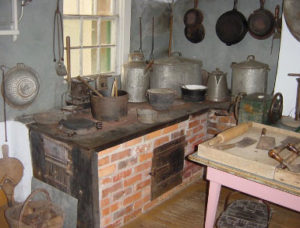 A cultural grant will support dinners at the communal kitchen in the Amana Colonies.

The Iowa Department of Cultural Affairs has awarded $2 million in grants for projects across that state. Department spokesman Michael Morain says the grants are awarded on a competitive basis. A grant of $7,900 was awarded to Davenport.

“They are organizing home-grown dinners for about two dozen people at a time at the communal kitchen museum,” according to Morain. “So guests can have a home-grown dinner from the era before cholesterol was invented.” He says the dinner guests will also get to hear from the descendent of those who lived in the Amana Colonies about what life was like there between 1855 to 1932.

The grants are awarded in a variety of categories. That includes through the Historic Preservation Office, which awarded a grant to restore an historic structure in Tama County. “There’s a 102-year-old bridge on the Lincoln Highway that passes through Tama and it needs some work. Fifty-thousand dollars is going to that project — obviously it costs more — but we can help chip away at those costs,” Morain says. Another $50,000 grant was awarded to the effort to restore the clock that tops the Clayton County Courthouse in Elkader.

“They have a really, really neat old clock. The clock was built somewhere I think on the east coast — and the clock itself weighs 800 pounds — and they shipped it in the late 1890s,” Morain explains. “And as you can imagine, things break down over a hundred years.” Morgan says the grants are designed to give each project a boost.

“Often we find that all of the pieces are in place except funding. That’s always the hardest part to get a project off the ground,” Morain says, “so if we provide a little funding up front, it sort of gives the project a stamp of approval and helps them get community matching grants.”

You can see a complete listing of all the grants here: https://docs.google.com/spreadsheets/d/1vUaOMxHdFAC-TWqkOwm844Ow_OnguPjY7HLDmYT3Qlg/edit#gid=0