You are here: Home / Outdoors / Volunteers pull thousands of pounds of garbage from Maquoketa River 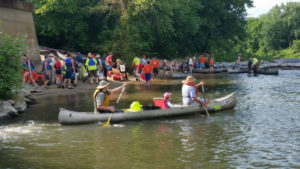 A 63-mile long stretch of the Maquoketa River is a lot cleaner thanks to an annual effort known as Project AWARE.

Brian Soenen served as coordinator of last week’s effort to pull trash out of the river through Delaware, Jones, and Jackson counties. Just under 400 volunteers took part in at least one day of the five-day project.

“Preliminary numbers show they pulled over 12,000 pounds of scrap metal, 4,000 pounds of trash, and 224 tires,” Soenen said. Some of the garbage included old boat engines and pieces of boat lifts and docks that were washed away eight years ago when flooding on the river led to the collapse of the Lake Delhi Dam.

“There was definitely some heavy cleaning that we were able to accomplish downstream of the Delhi Dam where there was a lot of debris that remained from the 2010 flood,” Soenen said. Although it was hot, with temperatures in the 90s for much of the week, Soenen called the conditions nearly ideal.

“We had no rain and the water levels were perfect for river cleanup,” Soenen said. “Volunteers could see through the clear waters to the bottom. Because of that, I have little doubt that there was nothing missed from the bottom of the stream.”

This marked the 16th year for Project AWARE. Soenen helped organize the very first river cleanup, which involved just a couple dozen people, back in 2003 – also on the Maquoketa River.

“It was like a homecoming to me, as well as many of the volunteers. A few of them from that very first trip were also involved this year. For them to have seen the program grow over time is pretty amazing,” Soenen said.

The final day of this year’s excursion produced a bit of a surprise. The volunteers found a car submerged underwater. The old Ford was cut into pieces before ropes and cables were used to pull it out of the water.