You are here: Home / Outdoors / Beekeeping teaches Clarinda prison inmates how to be calm 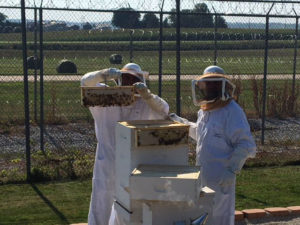 Inmates at the Clarinda Correctional Facility in southwest Iowa are getting the chance to learn about beekeeping, landscaping and horticulture through classroom learning and hands-on experience.

Inmate Owen Erickson says the program has taught him how to remain calm and have a positive attitude. Erickson says beekeeping is something he’d like to continue doing once he’s released. “It’s a good hobby and it’s relaxing. If you’ve got an attitude, you can’t be around bees, because they can sense it. It’s really relaxing to be able to go out there,” Erickson says. “I can sit next to those bees on the stand and just watch them come and go out of the beehive and they aren’t even attracted to you.”

Correctional officer Jerry Nelson spearheads the beekeeping program and calls himself a conservationist who keeps bees at his own home. Nelson says he offered to help get a bee colony started at the prison as a way to give offenders another avenue toward rehabilitation. “There are guys who are out there every day. If the weather is permittable, they are out there working on it. That is a major plus,” Nelson says. “They’re not sitting in their cells or trying to figure out how to do things they ought not be doing, they are working in a positive manner and that’s a major plus.”

Inmate Theodore Behrens is participating in the horticulture and beekeeping programs. He had some landscaping experience before, but says he’s learning how to improve himself and what he can offer future clients. “When I came in here before, I did a lot of mowing of lawns and some weeding in a garden, but now I know designs and how I can help people design their own things. I can give them positive feedback on how they could make their lawns better,” Behrens says. “All of that stuff makes a difference, especially if you want to open a business and that’s what I plan on doing.”

After 2,000 hours of work, an offender earns a completed apprenticeship through Iowa Western Community College. David Stephens, an IWCC instructor who works at the facility, says the inmates are growing a number of vegetables and herbs for the facility’s kitchen.

“We have a wide variety of tomatoes, peppers, cucumbers, green beans, sweet peas, radishes, carrots, onions and a wide variety of different flowers,” Stephens says. “The flowers provide both pollen for the bees, as well as just improving the looks of the grounds.” CCF is the first prison in Iowa and one of only a handful nationwide that boasts a bee program. Funding for the program comes from the facility’s recreation fund, which is generated by offenders buying items at the commissary, not taxpayer money. The produce and honey generated from the program is used in the facility’s kitchen to feed inmates. Additional produce is donated to local food pantries.