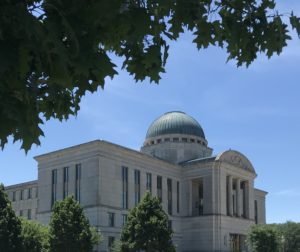 Governor Kim Reynolds will interviewed the three women who’ve been nominated for an opening on the Iowa Supreme Court on July 27. The state Judicial Nominating Commission submitted the three candidates to the governor last week, to replace a justice who is retiring in September.

“I do a personal interview with each individual and have an opportunity to get to know them and I want somebody that’s going to follow and uphold the law,” Reynolds told reporters today. “That’s what I’m looking for.”

The Iowa Supreme Court is likely to decide whether the state’s new law that bans most abortions is constitutional. The governor was asked today if the issue is a consideration as she decides which woman to place on the court.

“Is the abortion issue going to be a factor?” a reporter asked.

Reynolds replied: “I want somebody that will follow the law and will revere the constitution.”

Two women have previously served on the state’s highest court, but all seven justices on the court today are men. Iowa’s is the only state supreme court in the country that’s made up entirely of men. The new justice Reynolds appoints will have her name placed on the Iowa ballot in what’s called a retention election, but unlike the federal government, the Iowa Senate has no role in confirming judges.

(This post was updated at 2:53 p.m. after the governor’s office reported the governor misspoke this morning when she indicated she’s talked with one candidate and had two interviews left. One of the candidates was interviewed for a previous court opening by then-Governor Terry Branstad and Reynolds, who was lieutenant governor at the time.)