You are here: Home / Human Interest / Historic bridge in Floyd County torn down

An historic landmark in northeast Iowa is being demolished this week. The 108-year-old Charlie Western Trail Bridge spanned the Cedar River and connected the north and south sides of Charles City.

City Administrator Steve Diers says the bridge was originally built for railroad use in 1910. “It’s an important structure piece in the community,” Diers said. “It was originally built by the Hart-Parr tractor guys.” Charles Hart and Charles Parr formed a gasoline engine company in Charles City in the early 1900s and are referred to as the “founders of the tractor industry.” 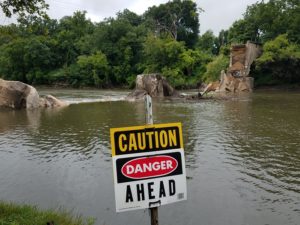 The bridge was closed to pedestrian and bicycle traffic last year when it partially collapsed. According to Diers, the bridge will eventually be replaced and he’s hoping it can be used by both vehicles and pedestrians. “Because one of the main uses of that bridge, aside from recreation, when floodwaters come up – that’s our emergency crossing for equipment,” Diers said. “When the bridges downtown close, that’s the only way across because you have that high crossing.”

Although the U.S. Army Corps of Engineers confirmed the Charlie Western Trail Bridge was “historically significant,” it had deteriorated beyond repair. The plans to replace the bridge carry a roughly $2 million price tag and, according to Diers, the city is applying for several grants to complete the project sometime in 2020.