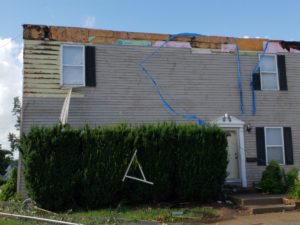 A roofless house in Marshalltown.

Lennox Industries was damaged, as was Unity Point Health Marshalltown Hospital. Police Chief Mike Tupper has been a law officer for 26 years and says the situation is dire.

“It’s easily one of the worst days of my life, horrific,” the chief says.

He says first responders have worked tirelessly in the central Iowa community since the twister hit, leaving a wide path of toppled trees, twisted metal, damaged homes and businesses.

“We spent all night last night making sure the area was secure,” Tupper says. “We wrapped up search and rescue operations last night. The fire department today will kick off FEMA assessments, damage assessments.”

Authorities will need to start getting a tally on how many houses and businesses were damaged or destroyed, in addition to city buildings and other public infrastructure, everything from missing stop signs to demolished roads and bridges, for the FEMA report.

“Those are very important. We’ve got to get those started right away and get them done right,” Tupper says. “We’re also assessing security needs. There’s a lot of work to do to get roadways cleared so we can get traffic flowing again.”

While the electricity was out to several thousand in Marshalltown following the storm, most have had the power restored now, but natural gas will take much longer to bring back online. Chief Tupper says utility crews are working diligently.

“They have to change out 5,000-plus gas meters,” he says. “They have over 200 people in town today working on this problem but it’s not going to be resolved today. We ask people if you don’t need to be downtown or in the affected areas, don’t come down. You’re just going to get in the way. It makes it harder for first responders to do their work.”

Patients who were evacuated from the hospital in Marshalltown were taken to other Unity Point facilities in Grundy Center and Waterloo.