You are here: Home / News / South Carolina’s Scott to Iowa GOP: ‘best is yet to come’ from Trump 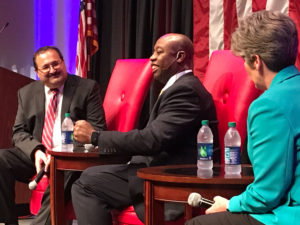 South Carolina Senator Tim Scott — the keynote speaker at an Iowa GOP fundraiser Friday night — told the Des Moines crowd President Trump has injected “the secret sauce” of optimism into the US. economy.

“Folks are a excited about this current economy and it’s been brought to you by a president who is unabashedly ‘America First.’ I think that’s a good thing,” Scott said, to applause.

Moments before Scott spoke, the crowd stood up and cheered after the Iowa GOP’s chairman declared the party was “100 percent behind” President Trump. Scott, in his remarks to the crowd, said there’s been “strong leadership” from the White House on economic issues and “the best is yet to come.”

“If we could just get our trade right — can I get an Amen?” Scott asked and the crowd clapped and responded with: “Amen!” Scott continued: “I’m confident we’re going to get it right — Dear Lord!…Agriculture’s the number one industry in this state; in my state it’s number three — if we just our ag and our trade and our tariffs right, Katie bar the door.”

Scott gave a 15 minute speech, then sat on stage with Senator Joni Ernst as the chairman of the Iowa GOP asked questions. Scott said it’s important for Republicans in congress to have a “defiant, yet hopeful spirit” as they seek to implement their agenda.

“Too often we feel like we’re not winning,” Scott said. “The fake news has been the fake news and will be the fake news for decades to come. They’ve never actually been enamored with the conservative agenda, as far as I can tell.”

Iowa Governor Kim Reynolds addressed the crowd as well. Check back Monday to hear her remarks and speeches from other top Iowa Republicans.