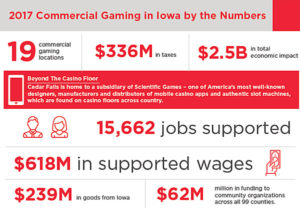 “The ripple affect with the support that they have for a lot of the small businesses, the non-profits and more — they estimated that job support at about 15,660. And total economic impact of $2.5 billion,”Ehrecke says. He says his organizaton had estimated the impact on the state at one billion dollars.

The AGA report shows the impact of casinos was found to be widespread. “The support not only in charitable contributions — but often times the volunteer efforts of casino employees — as well as just the presence of having so many sponsorships and other ways that they support the community,”Ehrecke says. Ehrecke says the casino industry has come a long way in the state.

“It was difficult to imagine by anyone 27 years ago when the first riverboat casinos in the country opened up on April 1st 1991. Today now we have 19 commercial casinos that are by design and encouragement by our regulators to be premiere entertainment destinations,” Ehrecke says. He says the amenities that go along with the casinos are part of the big impact they have on communities.

“Most have some form of dinning and lodging and in some cases, golf courses, bowling alleys, spas and other entertainment entities that really make these worthwhile attractions,” according to Ehrecke. “Plus the meeting space, the concert venues that make it a really the cornerstone of any community in any region.”

Ehrecke says the casinos also take the concern of those who might develop a gambling problem very seriously. He says the gaming industry has always been at the forefront of responsible gaming and he says for the gaming industry the number of problem gamblers has held around one-percent. Ehrecke says they fund and encourage those with a problem to call the gambling addiction help line. The AGA survey looked across the gambling facilities in Iowa, with a special focus on the impact of the casinos in Dubuque and Council Bluffs.

The study was released as a part of its “getting to know gambling” campaign.