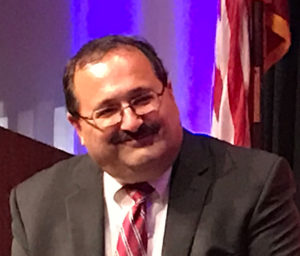 President Trump is scheduled to visit Iowa this Thursday.

Congressman Rod Blum of Dubuque tweeted about the visit, saying Trump would participate in a round table” discussion in Blum’s hometown of Dubuque. Abby Finkenaur, the Democrat who’s challenging the congressman’s bid for a third term, says Blum “has a responsibility” to make it clear how much Trump’s “Twitter trade war” is damaging farmers’ finances.

“The Republican Party of Iowa stands with President Donald Trump. We’re proud of you, Mr. President,” Kaufmann said Friday. “There! We’ve got that out of the way.”

Kaufmann made his comments to about 400 Republicans gathered in Des Moines for a party fundraiser.

“Do we agree 100 percent of the time? No. No one does. Are we proud of him? Absolutely. Is he better than the left-wing nuts that they’d like to replace him with? Always!” Kaufmann yelled into the microphone, the volume of his voice so loud it drew chuckles from the crowd.

The top Republican in the Iowa legislature also addressed the party activists and donors. House Speaker Linda Upmeyer of Clear Lake touted the agenda Republicans in the House, Senate and governor’s office pursued the past two years.

“If you care about lower taxes, gun rights, protecting life, election integrity or responsible budgets, you had a good two years,” Upmeyer said. “…But here’s the thing: we’re only halfway there. The Democrats are running to reverse every single bit of this.”

Upmeyer indicated a GOP legislative priority for 2019 will be passing a resolution so Iowans may vote on a constitutional amendment on gun rights.

“Our constitution is one of the very few in the nation that doesn’t enshrine your right to bear arms today,” Upmeyer said. “…So that’s what I mean — we’re only halfway there.”

“We can continue down the path that we’re heading,” Whitver said, “or we can go back to the way of Chet Culver and Democrats in control.”

Whitver told his fellow Republicans 2018 is the “most important election in at least a generation.”