You are here: Home / News / Executive decisions at center of debate in governor’s race 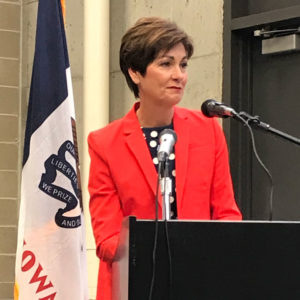 Republican Governor Kim Reynolds and Fred Hubbell, her Democratic opponent, are debating the executive decisions each has made in their careers.

A new Reynolds campaign ad questions how Hubbell managed the Younker’s department store chain in the 1980s and ’90s, when stores in three communities closed.

“When it comes to rural Iowa, I’m pretty excited to compare records because it’s not about what you say, but it’s about what you do,” Reynolds said this weekend.

Hubbell said the Ottumwa store closure was announced before he became Younker’s CEO and people in the ad talking about Younker’s closures in Ottumwa and in Spencer are local GOP officials, not Younkers employees.

“Let’s be honest…and let’s talk about the issues of today,” Hubbell said Monday. “…Lack of income growth, lack of access to health care for families and lack of access to education –the biggest challenges in our state — and she’s not talking about it.”

Iowa GOP chairman Jeff Kaufmann said Hubbell is using “a lot of smoke and mirrors” when discussing his time at Younkers and at Equitable, the insurance company started by Hubbell’s great grandfather. Kaufmann also suggests Hubbell was not qualified for jobs he held at the companies his family owned.

“I’m going to put my money with proven leadership, with Kim Reynolds, not some Polk County windbag that doesn’t have a clue,” Kaufmann said this weekend. 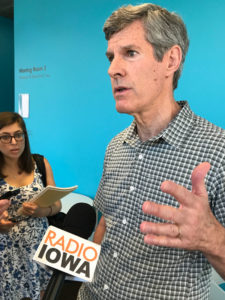 Hubbell said the tone of the ad shows Reynolds can’t run on her own “record of mismanagement,” from closing two of the state’s Mental Health Institutes to “slashing higher education” funding.

Hubbell is campaigning in the state this week, with stops in Nevada and Cedar Falls this afternoon. Reynolds is attending National Governors Association events in Colorado this week.