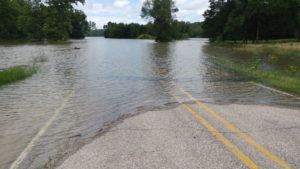 Thousands of bicyclists on RAGBRAI are pedaling 62 miles today from Jefferson to Ames, but they’ll bypass one of Iowa’s oldest state parks.

The RAGBRAI route was originally set to go through Ledges State Park near Boone, but the main road through the park has been under floodwater for weeks. Ledges State Park Manager Andy Bartlett says flooding has been “part of the history” of the park, which joined the state parks system in 1924.

“This one was definitely not the worst,” Bartlett says of this year’s flooding. “There are probably four or five others ahead of it over the years – 2008 was definitely worse, but in the last 10 years, this is probably the second worst flood we’ve had.”

Heavy rainfall in June led to flooding along most of the Des Moines River watershed, including Ledges State Park. “At its deepest, we had water down in the bottom of the park that was probably 20 to 25 feet deep in places,” Bartlett said. “Now, it’s definitely receding – not as fast as what everybody would like it to, but at a pretty good clip. As of right now, that water should recede off our road around August 1.” The park is open to visitors, but certain parts are inaccessible due to flooding.

“The floodwater has receded enough now to the point where visitors can come out and hike all of the trails that we have and access them – you just have to walk a little bit further,” Bartlett said. “The restrictions in place now are really where you can take your vehicle and not much else.”

The Ledges State Park campground is closed this year, not because of flooding, but rather for renovations. Some bicyclists might be happy with the change in the RAGBRAI route. Although they won’t pass through park’s spectacular canyon, the new route trims today’s ride by three miles and takes out a large climb up the Ledges State Park hill.