You are here: Home / News / Iowa and Michigan families accused of plan to illegally take deer 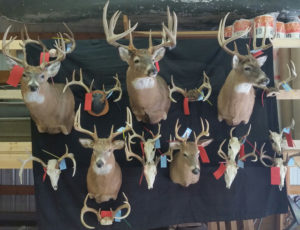 A family in Michigan is accused of illegally hunting deer in Eastern Iowa for nearly 16 years.

“The locals had not said who had shot it, nobody had any pictures, and it was a relatively large deer that I had watched grow up and nobody had heard what happened to it,” Wright told Radio Iowa. That’s when he began to review local landowner tenant deer tags. Wright noticed members of a family had been purchasing licenses since the early 2000s – but they were people he had never seen hunting, specifically bow-hunting deer.

“Typically, people in the area…you get to know them, you see the deer they shot – there’s pictures floating around social media or just around town,” Wright said. “And so, there were just a lot of things that piqued my interest.”

The investigation eventually revealed, since 2002, a Michigan family was supplied with lodging and tags for any deer they harvested on the Iowa farm – and in return, the Iowa family was given fishing opportunities in Michigan. Those involved are: Douglas Leo Hebert, age 49, of Indian River, Michigan,  his 51-year-old brother, Jeffrey Leo Hebert of Bay City, Michigan, and their 73-year-old father, Leo Frederick Hebert of Bay City, Michigan

The family in Michigan is paying $51,000 in fines for illegally killing 19 Iowa deer. Most of them were mounted. “Seventeen of those were bucks, antlered deer, that we were able to retrieve – all 17 deer racks,” Wright said. Three Iowans, accused of aiding the Michigan poachers, are paying fines totaling $780.