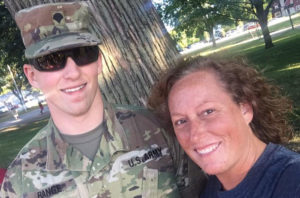 Members of a central Iowa family were very pleasantly surprised last night to see one of their own appear during the Hamilton County Fair parade.

U.S. Army Specialist Gunther Range has spent the past 16 months serving as a combat medic in South Korea. Range managed to keep his trip home on leave to Webster City a surprise.

“It’s not always fun when they know you’re coming home, it’s just not as exciting for everybody,” Range says. “I figured out who I wanted to let know I was coming home and figuring out when I wanted to do it. I missed the fair last year because I was overseas and I wanted to make it this year. I got with Grandma and figured out when the dates were and put in for my leave about two months ago.” The soldier’s mother, Amanda Range of Webster City, says the fair parade was a wonderful and very appropriate homecoming setting for her son.

“The fair’s been a big deal for us. I sat 23 years ago, pregnant with him, he’ll be 22 on Friday,” Range says. “His dad and I met at the fair in ’95. We were hoping to see him but he kept playing the card that, ‘I can’t leave yet.'” Amanda Range says it was stunning for her son to emerge during the parade.

“A little shocked at first,” she says. “The weird part was, his sister looked at me and said, ‘I’m going to scream if my brother jumps out of a fire truck,’ and their dad was sitting in the front seat and they all looked at him funny and the next thing you know, the door opened and we bombarded him.” Gunther Range plans to enjoy the Hamilton County Fair with his family through Sunday before he has to head back to duty.