You are here: Home / News / The political stakes in President Trump’s visit to Peosta 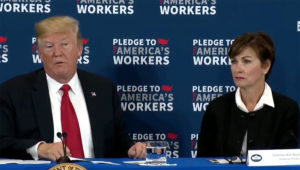 Trump referred to Blum by the wrong name shortly before the president gave Blum’s opponent a nickname.

“I’d like to maybe have Matt Blum speak next because he’s been so incredible in so many ways. He fights so hard. He loves this state. He loves the people. I guess he’s got a race against somebody they call ‘Absent Abby’ because she never showed up at the statehouse,” Trump said.

“He came to me recently about a flood wall and that’s a big deal, isn’t it, huh?” Trump asked Blum.

Blum agreed it was a “big deal” and Trump continued: “And how much money did you get?”

Blum provided the answer: $117 million. Trump then quipped: “If somebody else would have come, they would have gotten $2.” 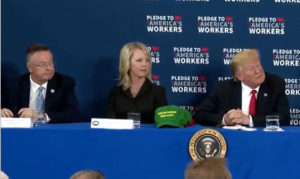 Congressman Blum (left) listens during the roundtable with President Trump.

Blum spoke for a few minutes, starting with this message to Trump’s Commerce Secretary about pending trade negotiations.

“I don’t mean to put the pressure, Mr. President, on Secretary Ross because I know he’s got a lot on his plate, but we made a bet on Air Force One on the way out here — a steak dinner…on getting a deal done with Mexico in the next 90 days,” Blum said.

Ross replied: “That’s right,” and Blum continued: “And I fully intend to buy you a steak dinner.”

Blum then directed his comments to Trump.

Trump said: “Thank you,” as Blum and the invited crowd applauded.

Finkenauer, Blum’s opponent, tweeted that her “heart is breaking for our farmers who showed up eager to tell (Trump) how his Twitter trade war is messing with their livelihoods….and (Blum) sat there thanking Trump and calling it courage.” Iowa Democratic Party chairman Troy Price accused Blum of being more interested in “kissing the backside (of Trump) than doing anything to fight for farmers.”

Governor Reynolds greeted Trump when the president reached the tarmac in Dubuque, then Reynolds sat to Trump’s left for the hour-long round table discussion at the community college in Peosta. Trump heaped praise on Reynolds.

“We’re just doing really, really well as a country and there’s no place doing better than Iowa. I mean there’s no place with better leadership, with more advanced thought,” Trump said and as the crowd applauded, Trump continued: “I want to thank your governor.”

Reynolds welcomed Trump back to Iowa and spent a few minutes talking about workforce development issues.

“We’re taking advantage of your tax reform, too, because we were able to pass tax reform in the state of Iowa as well as regulatory reform, so we’re partnering with you on a lot of great initiatives,” Reynolds said to conclude. “Thank you very much.”

A few hours after the event, Reynolds issued a written statement saying while she appreciated the public conversation and potential progress with the European Union, the governor said she “implored him to allow year-round sales of E15 and resolve this trade issue that’s hurting Iowa farmers” during a private discussion.

The Iowa Democratic Party blasted Reynolds. “So the governor can tweet her concerns, but she can’t actually hold (Trump) accountable when she’s in front of a TV camera?  Got it,” read the message on the party’s twitter account. Fred Hubbell, the Democrat who’s running for governor, said via Twitter that “a huge chunk of the Iowa economy is going to be hit by this trade war and the state needs (a governor) ready to stand up for Iowa farmers.”