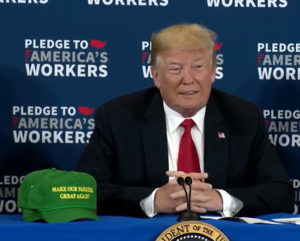 President Donald Trump today said the United States “has all the cards” as his administration seeks to re-negotiate trade agreements around the globe.

“We don’t have one trade deal that’s any good. Between NAFTA, which was a horrible deal and we’re getting close on that, but we’re making it good,” Trump said during an appearance iu northeast Iowa. “…But the biggest one of all happened yesterday, other than China, the E.U., a thing called Europe.”

Trump struck a deal with a top European Union official yesterday (Wednesday) with the ultimate goal of erasing all tariffs between the U.S. and the E.U., but in the near term, Europe is to buy billions of bushels of U.S. soybeans.

“We just opened up Europe for you farmers,” Trump said. “You’re not going to be too angry with Trump, I can tell you.”

Trump visited the Northeast Iowa Community College in Peosta today for a round table discussion about workforce development. Trump brought a new version of his campaign hats to the table. 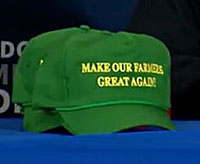 “It’s the John Deere colors, actually,” Trump said, holding the cap up for the crowd to see.

“‘Make Our Farmers Great Again!'” Trump said, reading the slogan on the cap out loud. “Isn’t that great?”

Trump told the crowd he is “taking care of your ethanol,” too.

“I’m very close, I have to tell you, to pulling off something that you’ve been looking forward to for many years and that’s the 12-month E-15 waiver,” Trump said. “It’s a very complex process and I stuck with ethanol and most other candidates, they weren’t there.”

The head of the Iowa Renewable Fuels Association says the ethanol industry appreciates the president acknowledging the need for year-round sales of E15, but Monte Shaw says he’s concerned Trump’s reference to the “complex process” means others in the administration are trying to tie approval of year-round E15 sales with other “anti-biofuels provisions.”

Trump arrived at Dubuque airport late this morning and shook hands with supporters who were waiting for Air Force One to land. The president also met with the mayor of Marshalltown to discuss its recovery from last week’s tornado. Later, during  his remarks at the community college, Trump mentioned the tornadoes that struck Marshalltown, Pella and Bondurant.

“I want to also send our prayers to the communities who have been affected by the recent, devastating tornadoes in central Iowa. That was all over the news and I watched it. I love this place. It’s been a very special place to me and, you know, whatever we can do, we’re doing. We have a lot of federal people out here, some incredible people, and they’re all working with your representatives and I know they’re doing the best they can, but I will tell you that’s a terrible event,” Trump said. “The power of nature. People have no idea.”

A crowd of protesters, many with posters critical of Trump’s trade policies, and supporters were outside the entrance to the community college campus when the president’s motorcade arrived.