You are here: Home / Sports / Another watch list for Iowa’s Noah Fant 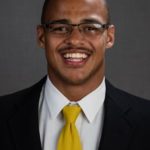 Iowa junior tight end Noah Fant has been named a Walter Camp Award player to watch. The announcement was made Friday by the Walter Camp Football Foundation.

Fant joins 49 others on the watch list vying for college football’s fourth-oldest individual accolade, which is given to the nation’s best player.

Ten semifinalists will be announced in mid-November and the winner will be announced live on ESPN on Thursday, Dec. 6. The trophy will be presented at the Foundation’s annual awards banquet on Jan. 12, 2019, in New Haven, Connecticut.