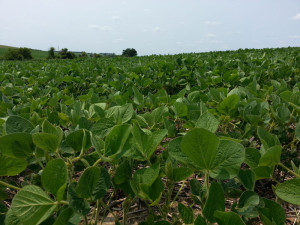 “Hopefully our ability to market our products to other countries besides China will be improved and will at least offset some of the China demand,” says Ray Gaesser of Corning, former president of the American Soybean Association.

Soybean prices are down 20 percent from March when the U.S. trade disputes with China started to escalate.

“US soybeans are less expensive than South American soybeans today, so there’s some good reasons to create new customers and hopefully new relationships for the future,” Gaesser says.

Another factor, according to Gaesser, is that the global supply of soybeans is down because of a drought in Argentina.

“Most of the South American soybeans, particularly Brazil’s, are going to China now,” Gaesser says, “so the European Union and some of the other countries are needing to come to the United States for supply.”

But some European countries have labeled American soybeans as “genetically modified” and refuse to purchase U.S.-grown beans. Gaesser says he hopes Trump Administration negotiations with the European Union will resolve those conflicts, erase all tariffs and make the European market a larger sales option for U.S. soybeans.