You are here: Home / News / Natural gas and wind power are the key factors in eventual closing of the Palo nuclear plant 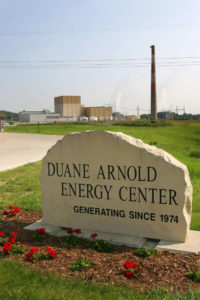 Alliant Energy announced an agreement  last week to end its purchase of power from Iowa’s only nuclear power plant in Palo 5 years early, which will lead to the plant closing down in 2020.

He says the cost charged to utility customers is based on the cost of producing the energy. Foss says natural gas costs used to be prohibitively high — but have come way down and there is now a stable supply. And he says the advancement in wind energy also provides another cheaper option. “Customers pay for the wind turbine to get built — but once it starts operating — there’s no cost for the fuel to make that energy,” Foss explains, “so we are seeing overall a lower cost for our electric customers because they are not having to pay on both ends, they are just paying on one end. And so, the more wind energy we can get here in Iowa, the lower costs we can have for our customers.”

Foss says they are often asked what happens when the wind doesn’t blow. He says that’s when the alternate source is used. “I think what’s important to understand is that we now have technology to supplement that — so that when the wind isn’t blowing — we have other sources of energy to help fill in the gap,” according to Foss. “But, when the wind is blowing, we are grabbing as much of that as we possible can to get that fuel cost free energy.”

He the use of natural gas is part of the plan to  supplement wind power and says the new natural gas-fired electric plant in Marshalltown is one of the most efficient in the world, and ready at a moment’s notice. “It is so quick to start generating electricity now, that when the wind starts to die down, that facility can be ramping up and be at full speed in a matter of minutes,” Foss says. “Where if you look at what it would take a coal-fired facility to do the same thing, it would be in hours or days.”

Foss says ending the contract for nuclear power will save the average customer $40 a year. Alliant Energy has agreed to make a $110 million buyout payment to NextEra Energy Resources in September 2020 to cover the cost to shorten the term of the power agreement with the Duane Arnold Energy Center. The new agreement must be approved by the Iowa Utilities Board.