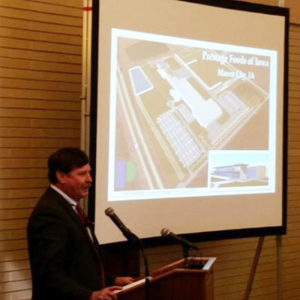 Construction is now passing the two-year mark on the massive Prestage Farms pork processing plant in north-central Iowa. Ground was broken near Eagle Grove in July of 2016.

Ron Prestage, CEO and president of the North Carolina-based company, says they’re entering the final stages of building the 240-million dollar facility in southern Wright County. “We expect the plant to be completed before the end of the year,” Prestage says. “As you can imagine, even after you get the plant completely built and equipped, there’s a lot of stuff that has to be checked out and cleaned up before you actually start processing hogs.”

It’s anticipated the plant will open late this year with very limited production. Excluding truck drivers, Prestage says they’re planning to employ a total of 922 people at the facility. “We don’t want to really start hiring people, the line workers and everything in the plant,” Prestage says. “We won’t really need them until later this fall to start getting them trained for the ramp up that’ll occur rapidly after the first of the year.”

Other arrangements are being made, like working with Unity Point to provide health care to the staff along with an in-house medical clinic. Initially, the plant will slaughter 10,000 hogs per day, with half of those hogs coming from Prestage’s own barns. The other half will come from independent producers. The 922 workers is for the first shift only. It may be a year or two before it’s determined whether a second shift will be created.