You are here: Home / News / Interim president at Briar Cliff University named to take over 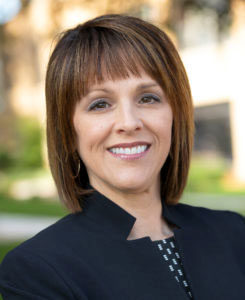 The woman who joined Briar Cliff University in Sioux City as the school’s new chief of staff 15 months ago is now the institution’s 11th president.

Rachelle Karstens was named Briar Cliff president today, and says she will work with faculty, students and the community to develop a plan to continue to grow enrollment and move the university forward.

“The good thing is because I’ve been here over a year in this leadership role, I feel I can hit the ground running and just get started right away,” Karstens says. Karstens was previously appointed as Briar Cliff’s executive vice president and then interim president following the resignation of former school president Hamid Shirvani. She says her long term career goal was to become a college president, but never dreamed it would happen this quickly.

She says she planned on getting her PHD and then learn about what it takes to become a president and then eventually seek out a presidential position. “It definitely was in my future — I am just humbled and honored that it happened this quickly,” Karstens says.

The chairman of the Briar Cliff Board of Trustees, Steve Freeman, says Karstens exemplifies Briar Cliff’s mission and values. “She’s an authentic leader. One with a proven background in higher education, law and donor relations, and she has demonstrated through her actions that she understands and appreciates Briar Cliff’s Fransiscan Catholic values and the role that that plays in shaping our students’ lives,” Freeman says. Karstens takes over her new role immediately.