You are here: Home / News / AAA Iowa warns about dangers of trying the ‘Shiggy Challenge’ 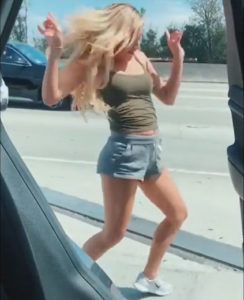 AAA is warning of the dangers of the “Shiggy Challenge.”

People tape themselves hopping out of cars — while the vehicles are still moving — to dance beside the rolling car to a song by rapper Drake.

Nick Jarmusz, spokesman for AAA Iowa, was stunned to see the videos online. “This is one of those things where I can’t believe that we would have to tell people that this is dangerous,” Jarmusz says, “but at the same time, it’s also not completely surprising. We know that people regularly engage in all sorts of dangerous behavior behind the wheel.”

The videos feature both passengers and drivers jumping out the vehicle to dance, sometimes even splaying themselves across the hood, as the car careens down the road.

“You’re kind of torn between not wanting to give it more attention and put ideas in people’s heads if they haven’t already heard about this, but I think it is still important to stress just how dangerous this is,” Jarmusz says. “Anytime you’re talking about a moving vehicle, there is the potential for not just serious injury but death.”

One collection of Shiggy Challenge videos is entirely made up of people falling, getting caught on the open door are even slamming themselves into utility poles, as they’re more interested in mugging for the camera than paying attention to their surroundings.

“Certainly, if you’re the driver and you’re doing something like this, that’s unquestionably dangerous,” Jarmusz says. “Even if you’re the driver and you’re the one taking the video of your passenger getting out and doing this, that’s a dangerous distraction. You shouldn’t be using your phone for any purpose behind the wheel. You should be focused on the road and focused on the task of driving.” The craze is clearly leading to people injuring themselves but Jarmusz says it’s likely only a matter of time before someone is killed.

“When it comes to the passengers who are jumping out, you’re basically transitioning from being a passenger to a pedestrian and being a pedestrian is inherently dangerous,” Jarmusz says. “You’re putting yourself into a very risky situation by exiting the vehicle while it’s moving, especially right out into an active roadway.”

Police departments in some communities are posting warnings about the challenge, though there are no reports of any serious incidents in Iowa — yet.