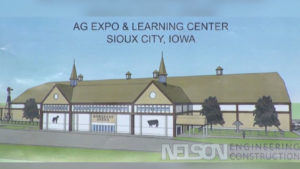 Officials involved in a northwestern Iowa expo center project say the venue could bring tourism and business dollars to the region.

Marty Dougherty, Sioux City’s economic director, says the planned nearly $12-million expo center has evolved in scope and size and it could help to bring farm and trade shows to the community — as well as more new residents.

“We need more people to move to Iowa and we need more skilled workers and families and young professionals,” Dougherty says, “and these are the kinds of things that they want.” Dougherty says the 100,000 square-foot venue could help the region compete with large nearby out-of-state cities.

Plans for the Siouxland Expo Center have changed over time, as it was originally intended to host equestrian events. Woodbury County Board of Supervisors chairman Rocky De Witt says he’s not sure whether the county will continue to financially back the expo center proposal.

“The project looks a little more solid and at least the county board now has an idea of what the final project is probably going to look like and the uses for it,” De Witt says, “so I feel better about that.”

Construction is slated to start in the summer of 2019. It’s still undecided whether the county will reduce any of its $1.5 million contribution to build the expo center. It’s part of a reinvestment district in Sioux City that has four large projects worth more than $130 million in public and private investment.