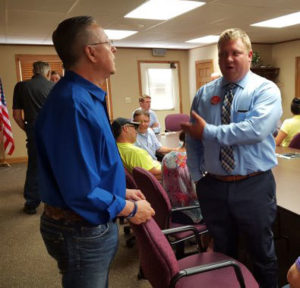 “Trust me. We talked about trade, trade, trade and how we need to get some of these trade deals…especially Mexico, done,” Blum said during a visit to Manchester this week. “…I absolutely hammered on those items.”

During last week’s round table discussion in Peosta, Blum thanked Trump for having the “political courage to renegotiate these trade deals” and Blum said farmers, manufacturers and employers “are all going to be better off” in the long-term because of it. On Monday, Blum said he had a longer, private discussion with Trump and not only brought up trade, but getting EPA approval for selling E15, a higher blend of ethanol, year round.

“It’s amazing to be able to spend 20-25 minutes with the president alone on Air Force One. I had dinner with Vice President Pence on Air Force Two three weeks ago,” Blum said. “I’m not saying that braggadociously. I’m saying that it’s good for the first district for their representative have that kind of one-on-one time with those individuals. It’s invaluable.”

The Vice President spoke at a Cedar Rapids business July 11 and then headlined a private fundraiser for Pence’s reelection campaign. Blum said on Monday that he’s told both Trump and Pence “the ag community needs a win” to emerge from negotiations with China, Mexico and Canada.

“We’re re-negotiating these trade deals with everybody, it seems like,” Blum said. “And can we get a win under our belts? I think that would be just psychologically for our ag producers, it’d be good news.”

Blum’s Democratic opponent, Abby Finkenauer of Dubuque, has tweeted that Blum’s “blind support for the Trump Administration’s Twitter trade war, despite its impact on our farmers, is out of touch” and it will take “new leaders” in congress to put a stop to it.