You are here: Home / News / One dead in accident east of Correctionville 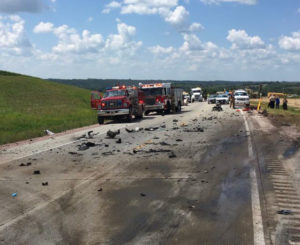 Debris litters the roadway following a fatal accident on Highway 20 near Correctionville.

Highway 20 east of Correctionville was closed for a time Tuesday afternoon following a fatal accident involving two trucks that left spilled debris across the roadway. Major Todd Wieck of the Woodbury County Sheriff’s office says the accident happened around 2 p.m.

“It involved a semi tractor trailer with some sort of a tanker on it because it had possible hazardous chemicals on it. And it was traveling westbound — the pickup truck was traveling eastbound,” Wieck says. “They collided in the roadway, how that happened, they are not sure. They are still doing that part of the investigation,” Wieck says.

The driver of the pickup died in the accident, while the semi driver was taken to the hospital in Sioux City. Their names have not yet been released. Traffic was detoured around the area while the debris was cleaned off the roadway.