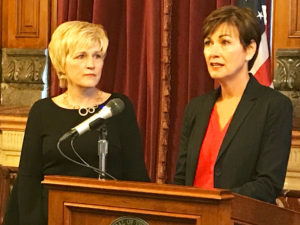 Governor Kim Reynolds has appointed a judge from Harlan to the Iowa Supreme Court.

“With her appointment, there will once again be a woman’s voice on the Iowa Supreme Court,” Reynolds said this afternoon.

Susan Christensen, who has been a district court judge since 2015, was one of three women nominated for an opening on the state’s highest court. Two women previously served on the Iowa Supreme Court, but Iowa has had the only all-male state supreme court in the country for the past few years.

Christensen and her family joined Reynolds for a brief announcement in the governor’s statehouse office. 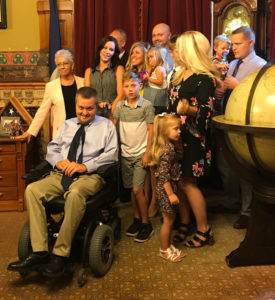 “To my soon new colleagues on the Iowa Supreme Court, I look forward to working with you,” Christensen said, “and dusting off the ladies room.”

Christensen has a family connection to the court. Her late father, Jerry Larson, served on the Iowa Supreme Court for 30 years — longer than any other justice in state history. Larson died this past April.

“I am honored and humbled to be appointed to the Iowa Supreme Court by the Iowa’s first female governor,” Christensen said. “Today marks an important day in my life as well as my professional journey. I want to thank my parents. My mom is here today…My dad is here with me in spirit and I know he has a huge smile on his face right now.”

Christensen worked as legal secretary before getting her law degree from Creighton University later. Christensen said she’s been “chasing the dream” of being a judge for years and she credited her husband, Jay, for supporting her quest.

“We started being a couple when we were sophomores in high school and here we still are, that many years later. Several years ago I told him: ‘I think I want to be a judge’ and it did not happen right away,” Christensen said. “And I tried many times and one of these days I’ll add up that number and I might just put it in a picture frame on my wall…It would have been easier to stop sometimes. He would not let me quit…If it were not for him, I know I would not be standing here today.”

Christensen is the first appointment Reynolds has made to the Supreme Court.

“We need judges who understand the proper role of the courts within our government, judges who will apply the law and not make it,” Reynolds said, “judges who will decide cases based on the text of our statutes and constitution, not their personal policy preferences.”

Reynolds said Christensen will bring a “practical perspective” to the court.

“Here are some of the things that I heard about Judge Christensen: ‘The most prepared and passionate person in the courtroom.’ ‘She’s dogged in pursuing excellence.’ ‘She’s more than just a sharp legal mind. She has an incredible heart.'”

Christensen will replace Iowa Supreme Court Justice Bruce Zager, who is retiring September 3. Christensen is scheduled to be sworn in and take Zager’s seat on the court the following day. At the conclusion of her remarks this afternoon, Christensen mentioned the oath she’ll take next month.

“Once again thank you Governor Reynolds for believing in me and entrusting me with this incredible honor and responsibility,” Christensen said. “And you can count on me to support the Constitution and to faithfully and impartially discharge my duties, to the best of my ability.”

Christensen will face a retention election in 2020.