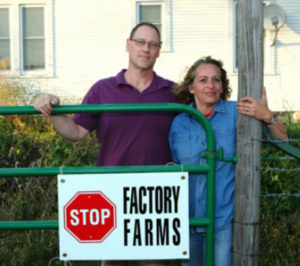 The group Iowa Citizens for Community Improvement is releasing a video detailing what it says are the devastating impacts of large scale livestock lots on the state’s environment, communities and people.

Erica Blair, a spokeswoman for ICCI, says there are more than 10,000 and so-called “factory farms” across the state housing millions of corporate-owned hogs, cattle and chickens. “They’re obviously not good for our rural communities,” Blair says. “They’re polluting our air and water. A lot of them are located very, very close to homes and it makes it really difficult for people to enjoy the outdoors anymore.”

The video claims the confined animal feeding operations statewide generate 22 billion gallons of manure every year, manure that’s dumped -untreated on fields as fertilizer. She explains the purpose of the video. “We had one of our members who lives next to a factory farm describe what it’s doing to his community, what it’s like to live only 1,900 feet away from 2,500 cattle,” Blair says. “We just wanted to share that story. There’s a lot of people out there who can relate to it.”

Schutt is running for Hardin County supervisor this November. The group is collecting signatures from Iowans who support a moratorium on livestock confinements. The petitions will be presented early next year to lawmakers at the state legislature. Blair says they already have more than 2,000 signatures.