You are here: Home / News / Hot, humid temperatures are coming back to Iowa 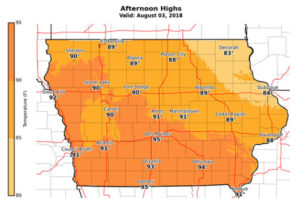 It’s been cooler-than-normal for summertime in Iowa but today and the next several days, the forecast is calling for hotter, steamier weather.

Meteorologist Andrew Ansorge , at the National Weather Service, says cities from Shenandoah to Lamoni to Des Moines may see highs of 95-degrees this afternoon.

“We’ll be flirting with mid-90s today in a few spots in Iowa but overall the next few days, we’re looking at high temperatures in the 80s to low 90s in general,” Ansorge says. “We’re also looking at dewpoints to increase into the 60s to near 70-degrees each day, so, it’ll feel a bit more humid than it has recently.”

These temperatures are relatively normal for early August, but it just seems hotter since we’ve had cooler weather for a while.

“We had a cool spell there, relatively speaking, in the latter part of July, which was much needed,” Ansorge says. “We’ve not seen much rainfall in the state so the cooler temperatures helped to ease the stress on crops. It’s still dry, but it could’ve been worse if it had been scorching hot the latter part of July.” Iowans who don’t use sprinklers or an irrigation system likely haven’t had to mow their lawns for a week or two and the grass is probably starting to get brown and crunchy. Relief may be coming soon.

“We’re looking at storm chances returning this weekend, northern Iowa moreso on Saturday and on Sunday into Sunday night, we’re looking at more statewide having a chance of rainfall,” Ansorge says. “Looks like the heaviest rainfall will probably not be where the drought conditions are over southern Iowa, but there still looks to be some rainfall down there.”

See more details on your forecast at weather.gov.